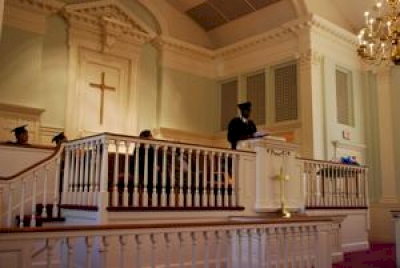 On a warm, sunny morning at the Chapel of All Faiths on the main square of Central State Hospital Tuesday, an unusually large crowd congregated to celebrate an important milestone.

In view of family members, local dignitaries, and a contingent of people not yet finished with the program, Tuesday’s ceremony honored graduates of the Ocmulgee Judicial Circuit’s Adult Treatment Court Collaborative.

After 18 to 24 months of an intensive recovery program, the six former drug abusers and mental health clients from the OJC’s southern region moved one step closer to long-term sobriety.

“To enter into our program, the first thing you have to do is qualify. We do not take people who have violent or sexual offenses on their records; we’re very selective on who enters this program,” said Judge Amanda Petty, one of three Ocmulgee Circuit Superior Court judges involved in the ATCC program. “The program lasts anywhere from 18 to 24 months — of course, we have some of those that hit bumps in the road and that we have for a little longer — with a six-month voluntary after-care program that participants can be involved in. … There’s a lot of work and effort that these graduates have had to put in to be able to be here today.”

Since its introduction to the Ocmulgee Judicial Circuit in 2003, the Adult Treatment Court Collaborative has served as an innovative and effective alternative to jail time for nonviolent offenders. When residents of Baldwin, Jones, Hancock and Wilkinson counties (the four counties that comprise the circuit’s southern region) are convicted of drug and mental health-related crimes, judges can offer offenders a chance to complete the program in place of serving time in prison. Upon entrance into the program, participants are assigned a rigorous routine of drug screenings, curfews, life skills and high school equivalency courses, Alcoholics Anonymous and Narcotics Anonymous meetings, employment searches, and check-ins with surveillance officers. Essentially a much stricter, two-year-long probation sentence, the program forces participants to adopt constructive habits without distraction from drugs and other diversions.

“When the judge approached me with it, I didn’t really know what she was talking about. I had never heard of [ATCC], I just wanted to do my sentence and go home,” said Wilkinson County resident and new ATCC graduate Anthony Miller. “On the way out, the sheriff asked me if I had understood what she was trying to say, and I said no. He broke it down to me, and I said, ‘OK, let’s do it’ because I wanted to save my job.”

A formerly gifted athlete from what he described as a “good family” in Sandersville, Miller had a long way to fall before he could pick himself up again. After transferring from Albany State to Georgia College his junior year of college, Miller fell into a 20-year battle with alcoholism that would eventually result in multiple DUIs. Now 49, and with a full ATCC program under his belt, Miller works two jobs and recently bought his daughter a car. In addition to providing for himself and his family in ways that he couldn’t during his addiction, the former state corrections officer is also giving back to young men at the Washington County Jail.

“I have found guys that are like me, younger men that are coming in behind me that need somebody to step in and say ‘I see where you’re going, and I’ve been there’,” he said. “I can try and give them hope to get better at everyday living because this is an everyday thing. It’s so amazing when they hear my story because for 10 years, I was the one that turned the key.”

Although Miller represents one of the more unique success stories to come out of the ATCC, his is far from the only inspiring story. Milledgeville native James Lanthrip III, one of Miller’s fellow Tuesday graduates, completed the program after a 17-year battle with drug addiction and plans to join ATCC as a peer counselor, for which he recently earned state certification. James Alford, a formerly homeless local resident currently enrolled in ATCC, draws on his experience as a director at the Serenity Home on Allen Memorial Drive helping people dealing with addiction. Many more graduates overcome issues including homelessness, lack of a driver’s license and transportation, difficulty finding employment due to criminal history, and lack of education.

Recently, the program expanded from semi-annual graduations to holding one every quarter, and the number of participants who make it through the program has increased steadily in recent years. In giving offenders the tools to remake their lives rather than incarcerate them at a greater cost to taxpayers, the Adult Treatment Court Collaborative has turned situations that traditionally derail lives into an opportunity to turn them around.

“I’m anxious to help somebody else, I really am,” said Lanthrip. “Today I have tools — I don’t have to go back out in the world and use. Those days are behind me, and if that thought process ever does cross my head, I’ve got goals that I can look back at that I’ve achieved through this process. I have people in my support system that I can call that will stop what they’re doing to come and help me, and I’ll stop what I’m doing to help any participant in here, too. It’s a good feeling.”