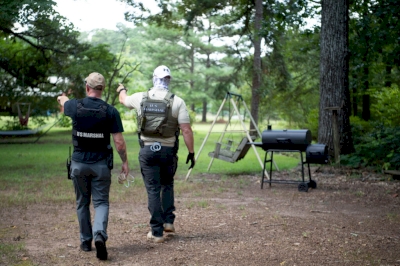 The U.S. Marshals Service along with state and local agencies have rescued 26 missing children in Georgia at risk of trafficking and abuse over a two-week period this month in Atlanta and Macon, according to an announcement Thursday.

Another 13 endangered children were determined to be in safe locations as part of the rescue mission called “Operation Not Forgotten.” Investigators made nine arrests and cleared more than two dozen warrants.

“The U.S. Marshals Service is fully committed to assisting federal, state and local agencies with locating and recovering endangered missing children, in addition to their primary fugitive apprehension mission,” Marshals Service Director Donald Washington said in a statement. “The message to missing children and their families is that we will never stop looking for you.”

The 39 missing children who were rescued or deemed safe via the operation were considered at high risk for child sex trafficking, exploitation, sexual and physical abuse and due to medical or mental-health conditions, according to a Marshals Service news release.

Officials said children were located in about 20 Georgia counties including Fulton, Gwinnett, Clayton and Forsyth. They were located in a variety of settings including homes, apartment complexes and motels where some were being trafficked for sex, according to officials.

Many of the children had been missing for several weeks, while one was missing for two years prior to recovery. Their ages ranged from 3-years-old to 17-years-old, officials said.

The Marshals have rescued more than 1,800 missing children since launching a partnership with the National Center for Missing and Exploited Children in 2005. Nearly 300 children were recovered last year.

“It’s hard to put into words what we feel when we rescue a missing child, but I can tell you that this operation has impacted every single one of us out here,” said Darby Kirby, who heads up the Marshals’ Missing Child Unit. “We are working to protect them and get them the help they need.”