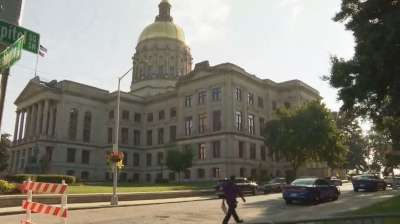 From surprise medical billing to an official state grape, here are some of the laws that take effect in the new year.

On Jan. 1, several bills signed by Gov. Brian Kemp during the 2019-20 legislative session will take effect.

Among them is the controversial “Police Hate Crimes Bill,” signed in response to a broader hate crimes bill passed after the murder of Ahmaud Arbery – a Black jogger shot and killed while being pursued by a white father-son duo in south Georgia.

There are several other bills designed to protect consumers – including the “Surprise Billing Consumer Protection Act,” and a bill that would regulate some automatic renewals for some contract services.

From surprise medical billing to designating an official state grape, here are some of the laws that take effect in the new year.

However, during the summer, it also became known as the “Police Hate Crimes Bill,” as anyone found to “intimidate, harass or terrorize” a police officer, because they are a police officer, would be guilty of a bias-motivated crime – i.e. a hate crime.

Also called the Surprise Billing Consumer Protection Act, this bill would provide for certain consumer protections against surprise billing. It would also establish methods to resolve payment disputes between insurers and out-of-network providers and an arbitration process.

It would allow military spouses licensed in other states to practice certain professions and occupations and obtain a license to practice in this state.

This bill pertains to Georgia’s booming film and entertainment industry and would move certain sound recordings from “qualified production activities” to production expenditures.

Also called Lacee’s Law, the bill would provide coverage under the state health benefits plan for additional screening to individuals at high risk of breast cancer.

Another bill related to medical billing would prohibit certain insurers from imposing a copayment, coinsurance, or office visit charge greater than charges for physician or osteopath services to an insured person for services rendered by a physical therapist, occupational therapist, or chiropractor.

This bill would restrict some criminal histories and arrest information after a certain time period if “conditions are met since a conviction.”

This bill would remove “redundant” processes involving the removal of “unattended vessels” in public waters.

SB 310 would set up certain regulations related to boxing, wrestling, and martial art associations and federations.

The bill would revise the definition, require continuing education, and outline unlawful practices, among other things. It would also provide the issuance of certificates of registration to professionals.

This bill would allow for the re-employment, training, and compensation of retired peace officers and correctional officers during disasters and emergencies.

The bill would designate the muscadine grape as the “official state grape.”

This bill would allow for state investment in railways and railroad facilities and equipment.

The Senate bill would revise garnishment proceedings. It would provide for “uniform procedures” for garnishment actions, provide definitions, and limit the maximum part of disposable earnings subject to garnishment in relation to certain educational or student loans.