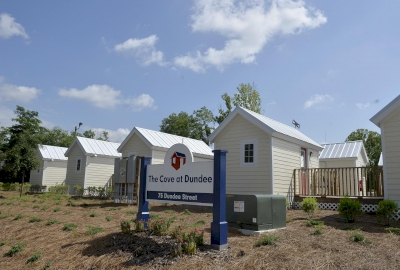 Dundee Village will sit on about a three-acre site, first with 65 tents and later with 65 converted shipping containers in what Monahan said would be a pilot project for possible use at other sites in the city.

First proposed as an overflow site for homeless left out of existing shelters because of social distancing requirements spurred by COVID-19, the project now has expanded to a pilot.

“That left some 100 homeless on the streets,” Monahan said. “We needed to provide overflow shelters. … It’s a quick solution but it’s a long-term solution.”

It offers an alternative to homeless camps under bridges and other sites in the city and provides showers and other amenities, he said.

Monahan said there are about 3,000 circumstantial homeless in Savannah, or those who have lost jobs or homes for a brief time. An additional 1,000 are chronic homeless, with about a third of those living in camps.

The city is waiting for Georgia Power to provide electricity to the site before moving in the tents, which is hoped to be in about two weeks.

In addition, a 10-by-40-foot shipping container will be on the site in the same time frame to provide a community center and case worker, Monahan said.

The additional containers are expected to begin in about six months and eventually will replace the tents as more permanent structures.

“We’re experimenting with the containers,” he said, adding that they make a perfect building block.

The camp will be laid out to accommodate single men, single women and family sections.

The city is establishing a code of conduct for Dundee Village residents, including prohibiting drugs, alcohol and firearms as well as sex offenders. Eventually, support or wrap-around services will be in place, although that will not be a city function.

Those services will include behavioral health and medical as well as job training, Monahan said.

“The city is not doing the work, not getting into this business,” he said.

Monahan said the Georgia Ports Authority has provided suppliers’ names, and he hopes the containers will be donated. Local businesses can donate the units as well, he said.

Those units will come in three sizes to accommodate single residents, couples and families, Monahan said.

Volunteers will be relied on to help flesh out the containers.

Monahan credited Alderwoman Linda Wilder-Bryan, who sought donations and got 200 tents, but they were small, one- or two-person shelters.

Amazon has agreed to trade those tents for bigger tents for as many as five people, he said.

Wilder-Bryan said the effort is a continuation of almost 39 years of work to assist “people who people want to forget.”

She said friend Andree’ Patterson, a community leader, sent her a news article on similar efforts in Tampa, Florida, to help the homeless. She went on Facebook to seek donations, including towels and socks.

“It just grew legs,” she said. “This will be the first time in Savannah that they will have an actual sanitary homeless site that offers lights and (security) camera, a washer and driers, toilets and showers.”

“They won’t look like containers,” Monahan added. He sought the input of Savannah architect Patrick Shay for design of the container homes.

“He volunteered to do it,” Monahan said. “He didn’t charge the city a dime for it.”

Shay, president of Gunn Meyerhoff Shay Architects, said that when Monahan approached him with the concept, he was “dubious.”

Architects in his office “ran a little bit of a contest in the office” and the results impressed, he said. Shay said the final package, on a smaller scale, will have some of the amenities of a small apartment.

“They are durable,” he added.

Monahan said the work can be done a lot quicker than the Tiny House project next door.

Monahan said that while he supports the Tiny House project by the Chatham-Savannah Authority for the Homeless, he thinks they have taken too long and been too expensive.

“I think it’s a better plan than the Tiny House project,” Monahan said. “It’s about economics and how quickly we can get it done.”

But the two projects will work in conjunction with each other, he said.

Chatham-Savannah Authority for the Homeless Authority Executive Director Cindy Murphy Kelley announced this week that the authority is moving ahead with fundraising for phase 2 of the Tiny House project, called The Cove at Dundee, to house military veterans who are homeless.

That project houses 23 homeless in Phase 1 and another 23 in Phase 2.