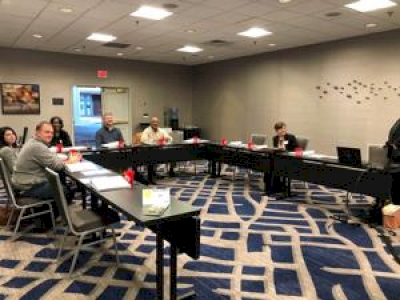 Rome City Schools board members went over student programs and policies Tuesday as part of their annual retreat, held at the Waverly Hotel in Atlanta.

Superintendent Lou Byars said dual enrollment numbers in RCS skyrocketed from 118 students in the last school year to 252 in this one. With dual enrollment, students also take some college courses. The credits give them a head start once they graduate high school.

Board members talked about ways to keep expanding opportunities.

“One of our goals is to increase diversity in our gifted programs,” Byars said.

While the number of Hispanic students increased the most for minority enrollment in the gifted programs, the gifted and dual enrollment programs are still overwhelmingly made up of white students. The Rome City Schools district is majority minority, Byars said.

“Our student enrollment needs to reflect that. It has to change,” said RCS school board member Alvin Jackson. “The more we get our students involved, particularly our minority students, the better off we’ll be.”

When asked how students were selected for the gifted programs, Byars said anyone can recommend that a student be tested — including the students themselves.

“I know this because my daughter recommended herself over 20 years ago,” he laughed. “The teacher did not think she was gifted, but she ended up passing.”

Dawn Williams, the assistant school superintendent, said even peers can recommend their own friends be tested for the gifted program.

During the retreat the board’s attorney, Chris Twyman, also presented two proposed written policies — one regarding police interviews of students and the other is regarding visitation.

Twyman said both policies are already in practice, but the school system needed clarification on each.

The first policy regarding interviewing and questioning by law enforcement specifies that parents are to be notified if police want to interview a student. The only exception is in the case of an emergency and Twyman said the determination of what constitutes an emergency is judged on a case by case basis.

“If it’s not an emergency, that interview is not happening if we can’t get in touch with a parent,” Twyman assured the school board.

One of the only times a parent might not be contacted is if there is a case of child abuse where the parent may be the perpetrator, he said. The policy also states that the only people who are allowed to search student lockers and vehicles on campus without a search warrant are school administrators.

In regards to the visitation policy, Twyman said that if a parent wants to visit a school, they simply have to give notice. In the case of a parent who is a registered sex offender, they would only be allowed to visit if their child is directly involved with a school event.

Under no circumstances are registered sex offenders allowed to volunteer for the district, and they will be escorted at all times while inside of the school, he said.

However, if a registered sex offender’s sentence states they are not to be on a school campus, they would not be allowed in any Rome city school — even to visit their child.