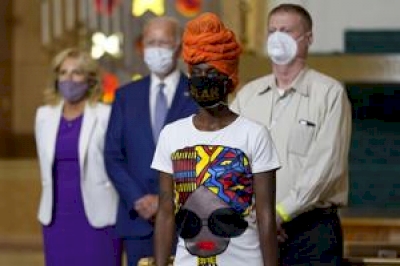 A roundup of some of the most popular but completely untrue stories and visuals of the week. None of these are legit, even though they were shared widely on social media. The Associated Press checked them out. Here are the facts:

THE FACTS: A law enforcement operation in August did locate 39 children in Georgia over a two week period, but the children were not all found in one trailer or in a single location. On August 27, the U.S, Marshals Service announced the completion of a two-week operation that located 39 children in Macon, Georgia, and the greater Atlanta area. During “Operation Not Forgotten,” the U.S. Marshals Service and other law enforcement agencies rescued 26 children and arrested nine people. Law enforcement also located an additional 13 children who had previously been reported missing, and confirmed the children were with the proper custodian. Posts on social media distorted some facts of the operation. “How is finding 39 missing children in a double wide trailer in Georgia NOT the biggest news story in America?” reads a post that has been widely shared and copied on Facebook. But the children were not all found in a double-wide trailer or even in a single location or on a single date, said Dave Oney, a spokesperson for the U.S. Marshals Service. “The children were found in a variety places — houses, hotel rooms,” Oney told the AP. Other children were located in apartments and “even on the streets,” according to Darby Kirby, chief inspector with the U.S. Marshals Service Missing Child Unit. Neither Oney or Darby were able to confirm if any of the children had been located in a trailer. Oney said some of the children had been missing for a few days while others had been missing for a couple of years. “Fifteen of the children were identified as victims of trafficking. The other children were victims of parental kidnappings, children who absconded from the Division of Family and Children Services, Department of Juvenile Justice custody, and were believed to be in danger or critically missing,” reads a statement Oney provided to the AP. While social media posts suggest the story about the children found in the trailer is not getting enough attention, that is because the claim about the trailer is false. Operation Not Forgotten was covered by many media outlets, including The Associated Press, CNN, CBS and others.

CLAIM: California just passed SB 145, a bill that would end felonies for child rape and legalize pedophilia in the state.

THE FACTS: SB 145, which has passed the California legislature and awaits the governor’s signature, would not legalize pedophilia. It would only give judges expanded discretion to determine whether an adult must register as a sex offender. Under current law, judges can make that decision in cases of voluntary, but illegal, vaginal sex with a minor age 14 to 17 and an adult within 10 years of the minor’s age. SB 145 would expand that law to include voluntary oral and anal sex within the same age parameters. The bill would not apply to any minor under the age of 14, nor would it apply to any age gap larger than 10 years. It also would not apply if either party claims the sex was involuntary. Advocates say the bill makes existing California law more inclusive for the LGBTQ community. The bill has been widely condemned by social media users falsely claiming it would legalize pedophilia. “PEDOPHILIA is now LEGAL in CALIFORNIA,” read a Facebook post viewed more than 8 million times. “Now a 21 year old can have sex with an 11 year old, and not be listed on the sex registry as a sex offender. This is unbelievable California!” Posts making such claims fundamentally misrepresent what SB 145 does, according to the bill’s authors and outside experts. Jessica Levinson, a professor at Loyola Law School, called the claims “hogwash” in an interview with The Associated Press. “The accusation that it somehow allows pedophilia is simply not true,” Levinson said. Also, contrary to false posts on social media, the bill would not apply when a minor is under the age of 14, when the age gap is larger than 10 years, or when either party says the sex was not consensual. If passed, the bill would “bring much-needed parity” to California sex offender registration law, according to a statement from Los Angeles County District Attorney Jackie Lacey, who drafted the bill. “This bill allows judges and prosecutors to evaluate cases involving consensual sex acts between young people, regardless of their sexual orientation, on an individual basis,” the statement said. The bill did face opposition in the legislature by some lawmakers, including Democratic Assemblywoman Lorena Gonzalez, who said she thought the 10-year age gap was too broad. The bill has passed both houses of the California legislature and awaits a signature from Gov. Gavin Newsom.