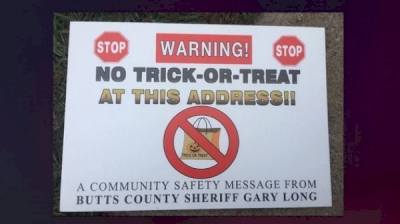 By Larry . . . In the last few days NARSOL has received comments regarding our decision to litigate the Halloween signs required by some sheriffs in the state of Georgia. The writer raised some legitimate questions even though he could have conveyed them with a bit more tact and politeness.

NARSOL chose to litigate the Halloween signs for a number of reasons. First, compelled placement of the signs threatens the safety of all occupants in the residence because of the potential for violence. Second, the constitution of the United States prohibits compelled speech by the government. Third, there is no statutory authority to support the actions of the sheriffs in Butts and Spalding Counties. Fourth, for NARSOL to stand idly by while law enforcement invents requirements jeopardizes everyone because there is no end of creativity in the law enforcement community. What will they invent next, and should we just stand down and hope for the best while they do so?

The writer bitterly complained: (1) that the Georgia General Assembly will soon vote on HB 720. This legislation will permit Halloween signs to be posted in the front yard of all registrants; and (2) the vast majority of registrants in the state of Georgia were not subjected to Halloween signs. He concluded by saying, “Thanks to NARSOL, the rest of us are facing the same humiliation . . . ” The Georgia House of Representatives did vote to pass HB 720, and it is now in the Senate awaiting consideration. No hearing has been scheduled due to the suspension of the legislative session due to the pandemic and health concerns.

He even opined that the action by the state was easy to forecast. He is correct. NARSOL did anticipate that such a proposal would be introduced and likely enacted into law by the Georgia General Assembly. The problem with ignoring the renegade sheriffs in Georgia was that the cancer would have spread throughout the state had NARSOL not intervened. In fact, the action was recommended by the Georgia Sheriff’s Association, and other counties had announced similar intentions regarding mandatory placement of Halloween signs. Actually, the sheriff of Ben Hill County announced he would erect the signs this past Halloween, and NARSOL immediately sent a cease-and desist-letter. Beyond that, simply ignoring constitutional violations because it does not impact everyone is a misguided strategy. In fact, that is part of the reason we have marked passports. Several states chose to require that driver’s licenses actually bear the words “sexual offender”; if there had been even one successful challenge against this, case law would be in existence to aid in fighting marked passports. NARSOL felt that the Halloween sign requirement was likely to spread to all 159 counties in the state of Georgia.

NARSOL does anticipate that HB 720 has a good chance of passage once the session reconvenes. That said, we are prepared to challenge the constitutionality of the legislation once it is signed by Governor Kemp. The case law on compelled speech is favorable to our position, and we believe that our chances of victory are quite good. It is critically important that our constituents understand that each victory builds the body of case law which helps us in other challenges. If we had done nothing, there would not be the Does v. Snyder decision from the Sixth Circuit Court of Appeals, nor would there be many other victories which have been won in recent years. NARSOL has stated on numerous occasions that all laws enjoy the presumption of constitutionality upon enactment, and that the challenging party bears the burden of showing by the clearest of proof that the challenged statute is invalid. That being said, this particular challenge is a very strong one in our opinion because the First Amendment of the United States Constitution is something that the courts have been consistent in protecting. This particular challenge enjoys the support of the Alliance of Constitutional Sex Offense Laws as well as NARSOL.

Larry serves as NARSOL’S treasurer, publisher of the Digest, and co-chair of the conference planning committee. He also hosts the “NARSOL in Action” and “Can They Do That?” webinars and is a regular on the “Registry Matters” podcasts.