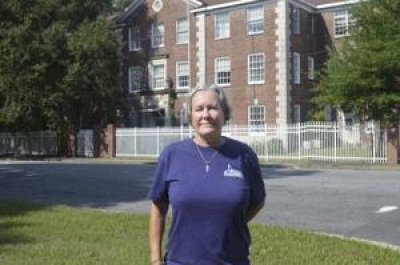 Cindy Supernaw has fond memories of her days as a seventh-grader at Frederica Academy when the school was located in what is now Harpers Joy, a home for the mentally disabled in Brunswick’s downtown historic district.

Frederica Academy held classes for several years in the building after the old Brunswick hospital closed. She’s seen a lot of changes since Frederica Academy moved to St. Simons Island and the building was repurposed as a home for the mentally disabled called Harpers Joy more than two decades ago.

Supernaw lives in a house less than a half block away from Harpers Joy, and like many living in the surrounding area, she has never had a complaint about the residents and believes they are good neighbors.

In fact, when the state tried to close Harpers Joy in 2012, neighbors rose up to express their support for keeping the facility open. After months of protests, and with the help of then State Rep. Alex Atwood, the state backed down and kept Harpers Joy open.

What has dismayed Supernaw and many others is a proposal to turn Harpers Joy into an apartment complex for the homeless. And she’s not alone.

A petition started after last week’s meeting has already generated more than 670 signatures opposing the creation of a homeless home at the old hospital.

There are lots of concerns about how surrounding neighborhoods will be affected if Hand in Hand of Glynn, Inc. goes forward with plans to convert the building, she said.

Critics of the proposal say the old hospital building, located on Norwich Street, is too far from the commercial district downtown — about eight blocks away — for residents to walk through residential neighborhoods to shop, work or go to doctors appointments.

Some have also expressed concerns about the potential for an increase in crime, loitering, noise late at night and the difficulty residents will have grocery shopping, doctor’s appointments and job hunting at the location.

“We need a place for the homeless but not in a residential neighborhood,” Supernaw said. “That’s going to screw up this neighborhood.”

Another neighborhood resident, Melanie Page, said she is concerned the park across the street from the old hospital building will become a magnet for the homeless.

“It’s a bad idea,” she said. “There are no services close to here. It doesn’t make a lot of sense.”

Page said a homeless home should also come with mental health services for some of the residents, which was not mentioned at the meeting by the Hand in Hand of Glynn representatives who spoke. Hand in Hand became a registered charity in Georgia in February and there is no contact information other than a post office box address. Nobody from Hand in Hand could be reached Wednesday for comment.

Anne Stembler, of St. Simons Island, one of the Hand in Hand members who explained the project to a sometimes hostile audience last week, said volunteers have raised more than $500,000 for the project, estimated to cost about $3 million to renovate the building.

What attracted organizers was the building already had 24 efficiency apartments with electricity metered by unit, sprinklers and security cameras already system in place, a recent inspection by the fire department and proper zoning.

Organizers said they would be selective on who would live in the complex. Sex offenders and people convicted of violent crimes would not be eligible to live in the building. Overnight guests would not be allowed and visitors would be required to show identification prior to entering the building, which will have security around the clock.

Supernaw said the current use of the building as a home for the mentally disabled would be ideal. But Gateway officials who manage the property said they have already moved out about one third of the residents, and they plan to move the remainder in coming months.

But if Harpers Joy is determined to move, Supernaw had another suggested use for the building.

“I think the use they have now is the right one,” she said. “It would make a great loft. Even just an apartment complex would be great.”