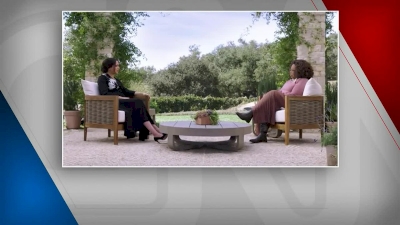 LONDON (AP) — The timing couldn’t be worse for Harry and Meghan.

The Duke and Duchess of Sussex will finally get the chance to tell the story behind their departure from royal duties directly to the public on Sunday, when their two-hour interview with Oprah Winfrey is broadcast.

But back home in Britain, events have conspired to overshadow the tale of a prince and his American bride. On top of the pandemic and record economic slump, Prince Philip, Harry’s 99-year-old grandfather is now recovering from a heart procedure.

CBS announced the program Feb 15. The next day, Philip was admitted to hospital.

“Harry and Meghan are hugely popular,’’ Pauline Maclaran, a professor of marketing and author of “Royal Fever: The British Monarchy in Consumer Culture,” told The Associated Press. “But I think that some people who might otherwise have supported them will find this just a little bit distasteful, that they’re drawing all this attention to themselves … just at this time when Prince Philip appears to be quite seriously ill.”

Though it is the choice of CBS when to air its pre-recorded interview, critics are already lining up to deride it as a brand-building exercise by the pair, who left Britain saying they wanted to live a normal life but have been accused of continuing to use their royal status to open doors and make money.

The sit-down with America’s queen of celebrity interviews is a chance for the couple to explain what led them to quit royal life, citing what they said were the unbearable intrusions and racist attitudes of the British media. A book about their departure, “Finding Freedom,” also alleges that senior royals had little respect for Meghan, a biracial former actor, and that courtiers treated her badly.

Pre-released clips have already shown Harry talking about his fears that history would repeat itself after his mother, Princess Diana, died in a car crash while pursued by paparazzi. In another clip from the interview, Winfrey asks Meghan how she feels about the palace “hearing you speak your truth today?”

“I don’t know how they could expect that, after all of this time, we would still just be silent if there was an active role that the firm is playing in perpetuating falsehoods about us,” the duchess replies.

“The firm” is a nickname for the royal family, sometimes used with affection and sometimes with a note of criticism.

Ahead of the broadcast, relations with the palace are increasingly strained. First there was Queen Elizabeth II’s decision to strip Harry and Meghan of the handful of royal patronages they had retained in the one-year trial period following their departure last year. The couple responded with a terse statement promising to live a life of service — a move many in the U.K. saw as disrespectful to the queen, as she usually has the final word. Then on Wednesday, the palace said it was launching a human resources investigation after a newspaper reported that a former aide had accused Meghan of bullying staff in 2018.

One of the authors of “Finding Freedom,’’ Omid Scobie, compared the recent commentary about Harry and Meghan in the British media to the Salem Witch Trials, while noting Americans have had more sympathy them. His tweet linked to a discussion on the U.S. television program “The View,’’ including comments from Meghan McCain, a conservative columnist and daughter of the late U.S. Sen. John McCain.

“I think we can’t ignore the elephant of the room that there’s probably a racial angle to this,’’ McCain said. “There’s a lot of racism directed at this woman, in a lot of different ways she threatens a lot of people in the patriarchy. … It just looks like they are bullying her in the press.’’

It was all supposed to be so different.

At the time Harry started dating Meghan, the British public seemed smitten with the beautiful young woman who starred for seven seasons on the U.S. television drama “Suits.” When they married in 2018, newspapers were filled with optimistic stories about how the energetic couple would help make the monarchy relevant for a new, multicultural Britain.

But less than two years later they decamped to North America. After a brief stay in Canada, the couple settled in Meghan’s home state of California, buying a house in the exclusive Santa Barbara County enclave of Montecito that reportedly cost more than $14 million. Among their neighbors: Oprah Winfrey.

Then came deals with Netflix and Spotifiy, reportedly worth millions. The commercial deals and headline-grabbing amounts are uncomfortable for the royal family, which has devoted itself to public service as a justification for its wealth and privilege. The queen, among the richest people in Britain, has spent her life supporting charities, cutting ribbons at hospitals and traveling the world to represent her country.

“The main thing that the royal family is so good at is serving the nation, serving the nation and the Commonwealth, basically serving us rather than serving themselves,’’ royal historian Hugo Vickers told ITV News. “And I’m sorry, if you’re sitting in an $11 million mansion in California and making fantastic deals, that is trading in on your royal heritage. And it’s all wrong, frankly.”

Others are concerned that the interview will include damaging revelations about the royal family.

The royals rarely grant interviews, and when they do the questions are usually narrowly focused on specific issues. For instance, Harry and his brother, William, have tried to remove the stigma from mental health problems by talking about their own struggles after the death of their mother.

More free-ranging interviews have often gone badly. Interviews with Prince Charles and Princess Diana, Harry and William’s parents, around the time of their divorce led to embarrassing revelations about infidelity.

More damaging for the palace was the interview Prince Andrew, Harry’s uncle, did with the BBC in 2019. Andrew tried to address rumors about his links with convicted sex offender Jeffrey Epstein, but he was forced to give up royal duties after failing to show empathy for Epstein’s victims.

“I think it’s a bigger danger than the Prince Andrew car-crash interview,’’ Maclaran said of the Oprah interview, “because I think that Meghan is going to get a lot of sympathy, particularly from American audiences, about her position being untenable.”

Regardless of what’s actually said, the interview is a threat to the stature of the monarchy because it further blurs the line between celebrity and royalty — tarnishing the royal mystique, Maclaran said.

Late night chat show host James Corden underscored the threat to the royal brand during a tongue-in-cheek segment with Harry broadcast last week in which Corden suggested the prince and his wife might move into the mansion that provided the backdrop for the 1990s sitcom “The Fresh Prince of Bel-Air.”

The line put Harry, whose father and brother will be king one day, on the same footing as a TV character who fled west Philadelphia for a posh life in Southern California.

Royal watchers wonder what could possibly be next.

“It’s just such a mess,” said Penny Junor, who has written several books about the royals, including a biography of Harry. “I don’t think there are going to be any winners in it.”