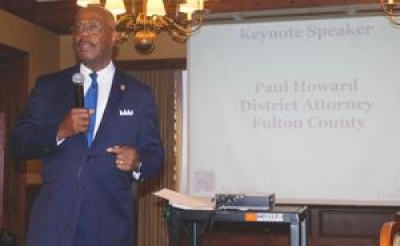 The system that has allowed repeat offenders to be released by Fulton Magistrate and Superior Court judges on signature or low bonds and/or probation has been criticized by residents, law enforcement agencies and other officials as broken.

“Our entire system is not set up to currently to rapidly dispose of cases. That’s very important,” Howard said in an interview. “Once you get past disposing of cases, you don’t have to worry about getting out on bond.”

He referred to a 2000 study of the Fulton justice system by Barry Mahoney of the Justice Management Institute in Denver that gave three recommendations for ways to improve it.

“First is that the DA’s office should set up a front-end evaluation process, and that process is called the complaint room,” Howard said. “It’s designed to quickly evaluate cases so the prosecutors can make a decision as to whether or not those cases should remain in the system. The second thing they recommended is the court should set up a criminal division of judges and a court that only handles criminal cases. The reason that suggestion was made is so the cases could rapidly be completed or disposed of. The third thing the study recommended is that in Fulton County, we should set up an aggressive case-processing standard. What that means is every case, once that case is charged, it should be completed within a certain time period.”

The only suggestion implemented was the complaint room, he said.

“We don’t have the other two,” Howard said. “Because those things don’t exist, that’s why we are talking a lot about bonds in cases when we should be talking about disposing of cases so if they are incarcerated, they are by the state and not paid for by Fulton County citizens. I understand how people would look at the complex court system. I believe it shouldn’t even exist. It’s a bad system. We ought to abolish it. There’s been a lot of controversy about how 70 percent of the cases assigned by the Superior Court are handled by two un-elected judges in the Magistrate Court. … It’s a bad system. What we ought to move to is a criminal division, as is done in many urban courts throughout this country. Also, the urban systems in other courts utilize case-processing standards. For instance, if someone is charged with entering an automobile case, we have to get that case disposed of within 90 days. We have some defendants waiting two or three years for a trial. Most are more serious cases, including murder and sex crime cases.”

Howard said Mahoney said if those two recommendations were implemented, the Fulton County Jail, which has had overcrowding issues in the past, would reduce its number of inmates in half because their cases would be processed faster, so they would go into the state prison system sooner.

“Why is that important? The money we’re using to fund those defendants in the Fulton County Jail unnecessarily could be used in better ways to hire more people so we could get through these cases faster,” Howard said, adding another study recommended the district attorney’s office double its number of lawyers, which now stands at 114.

March 1, a day after the justice system and repeat offender issues were mentioned often at a town hall meeting in Buckhead hosted by Atlanta Mayor Keisha Lance Bottoms and her senior staff, Howard also sent a letter to the chief judges of the Fulton Superior, Magistrate and State courts and the solicitor general. In the letter, he wrote that he has ideas on how to fix the repeat offender issue.

“The Fulton County district attorney’s office has complained for many years that the issue of release by Fulton County Magistrate judges is particularly harmful when it involves defendants who are arrested and charged with serious violent felonies,” Howard wrote. “On March 5, 2018, the Superior Court judges of Fulton County, in response to this request, made the adjustment to remove the ability of magistrates to release a defendant who is charged with these serious violent felonies: murder, rape, aggravated child molestation, aggravated sodomy (and) aggravated sexual battery.

“I am writing this letter today because it is my opinion that the time has come for our system to make two additional changes. First, magistrates should be prohibited from issuing bond for seven additional violent offenses including: armed robbery, kidnapping, home invasion (in the) first degree, aggravated stalking, motor vehicle high-jacking, aircraft high-jacking, defendants who are repeat offenders and charged with the following offenses: arson, aggravated assault and burglary. Secondly, I am requesting a more extensive change in our release procedures as they relate to repeat offenders. …

“And if the Fulton County district attorney opposes such bond or release by the magistrate, in such case the action by the magistrate shall constitute a recommendation for bond to be reviewed for final disposition by a sitting Superior Court judge. To ensure the success of such policy, the district attorney pledges not to oppose all bond matters, but rather to limit his objection to cases that present discernible harm to the public.”

Atlanta Police Chief Erika Shields, who talked at length at the town hall meeting about the repeat offender issue, issued a statement in response to Howard’s letter.

“I’m encouraged by Mr. Howard’s willingness to take action on this issue,” she said. “The easy issuance of bonds for convicted and repeat offenders has been a continued thorn int he side of our officers out there on the streets making these arrests. But any real movement on this issue will also require any judge — not just magistrates — to be diligent in carefully and thoughtfully reviewing these cases, especially when it involves violent, repeat offenders. Today’s appeal by Mr. Howard to the Fulton judiciary is a step in the right direction, but by no means is our collective work done.”

Fulton Magistrate Court Chief Judge Cassandra Kirk issued a statement in response to Shields’ town hall comments regarding the Magistrate Court’s role in the justice system. Shields said, “All we’re asking of them is before you make a decision whether a person should walk out the door (with a low or signature bond), you have the person’s criminal history in front of you and the initial (arrest) report. That’s it.” She also asked that court’s judges to further investigate cases if not enough evidence regarding a defendant’s criminal background or police report is presented.

Kirk said, “The situation is not as simple as the police chief portrays. The issuance of bonds relies heavily on the sworn testimony and information presented during the hearing by (the) state and the defense. Judges are prohibited from investigating cases. This means that judges cannot conduct their own research on cases pending before them and must rely on the proper parties to bring forth relevant information, such as criminal histories, police reports and pretrial recommendations. I look forward to collaborating on process improvements with all stakeholders.”

Howard also said other adjustments are needed to help improve the justice system.

“We should have some very clear, attainable goals. For instance, if you are a defendant and if you’re charged with a crime and not working, the probation department ought to assist you in getting a job. If you don’t get a job, there’s a good chance you’re going to come back (through the system) again. … (With) the largest number of criminal defendants, in the State Court of Fulton County, there is not a probation department operated by the state or the county. That’s why I think the county, because of our repeat offender problem, should take charge of taking on the probation department in Fulton County. How do you pay for it? I think we can do that by reducing our jail population not by letting out defendants on bond but by processing the criminals faster so they go into the state prison system.”

Howard also said the county needs to “do is a better job of embracing technology,” including adding more surveillance cameras and license plate readers. He also said he believes the county should better use the cameras it already has to find and arrest suspects, “to discourage criminals from committing crimes.”

“There are some other things like ShotSpotter, the technology using radar to detect gunfire. We need to use it in conjunction with video surveillance. That’s what they’re doing in cities like Orlando and Washington,” he said, adding the funds for these items would come from the money the county would save on its jail population once other reforms are in place.

But the Atlanta Police Department already has some ShotSpotter devices installed for its officers to use as part of a pilot program financed by Georgia Power Co.

“We have five square miles of coverage with about 20 sensors per square mile,” said Officer Jarius Daugherty, a department spokesman.

Finally, Howard said Fulton should create a countywide pawn desk that would track items just sold to pawnshops and other similar businesses, since thieves often try to pawn off the things they steal.

Concerned Citizens United, a Facebook group of about 5,000 Atlanta residents pushing for reforms in the justice system, recently met with Howard to talk about their solutions to the repeat offender problem. One of them is to have some offenses, such as entering an automobile to steal items (including slider crimes) be upgraded from non-complex to complex (complex crimes are categorized as serious offenses such as rape and murder), so they would only go before Superior Court judges and not Magistrate Court ones. But Howard said if the county set up a criminal division, it would accomplish Concerned Citizens’ goal.

The group also wants the Fulton County Board of Commissioners to hire an individual to handle oversight in the district attorney’s office so money is allocated in that department where it was supposed to be. Howard said he disagrees with that suggestion and added his office is already scrutinized enough by the county when it comes to budgeting. However, he said, if Concerned Citizens is also worried about the lack of technology used to help each department within the justice system communicate better with each other, he agrees with it in that regard.

An email to Fulton Commission Chair Robb Pitts seeking comment on what the board can do to help solve the justice system’s problems was not returned by the Neighbor’s deadline.