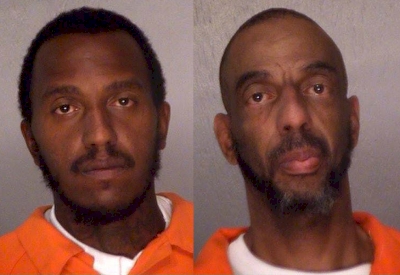 MACON, Georgia (41NBC/WMGT) – Bibb County Sheriff’s deputies responded to a Crimestoppers tip that led to the arrest of one of the Top 15 Most Wanted.

Deputies say they received a tip that 32-year-old Kenon Mekeal Newbill was at a house on the 1100 block of Rocky Creek Road.

Authorities say as deputies approached the house, they noticed 55-year-old Andre Byron Newbill pull a gun out of his pocket. That’s when deputies drew their weapons.

Authorities say that deputies instructed Andre to put the gun down and he did. Deputies then arrested Andre without incident.

Authorities say that they checked Andre and found that he was a felon.

Later, deputies say they entered the house and arrested Kenon without incident.

Deputies took Andre to the Bibb County Jail and charged him with the following:

Deputies took Kenon to the Bibb County Jail and charged him with the following:

If you have any information about this incident, call the Bibb County Sheriff’s Office at 478-751-7500. You can also call Macon Regional Crimestoppers at 1-877-68CRIME.