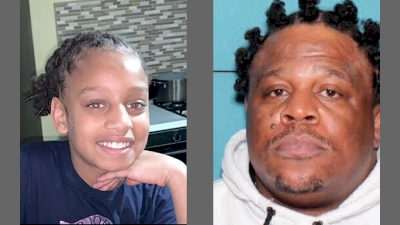 In a press conference Tuesday afternoon, Davenport police announced a “person of interest” in Terrell’s case, 47-year-old Henry Earl Dinkins of Davenport. Dinkins is in custody on a separate charge of a sex offender registration violation second or subsequent offense, a Class D Felony.

Police said Dinkins has known connections to the Clinton and Camanche areas.

According to Davenport police, Dinkins is a person of interest in the case and has not been charged in connection to Terrell’s disappearance; however, the Amber Alert issued Wednesday labels Dinkins as Terrell’s “abductor.”

During a media briefing at the police station, Davenport Police Chief Paul Sikorski said a person of interest is “someone who has not been arrested or formally charged in this case but may have information that could assist the investigation or possess certain characteristics that merit further attention by investigators.”

Earlier that day, Terrell was reported missing. Police say she was last seen in the 2700 block of East 53rd Street in Davenport. She is 4-feet-5-inches tall, 75 pounds and has black hair and brown eyes. She was last seen wearing a white T-shirt, flip flops and shorts.

“We are asking the public’s assistance for any information regarding Dinkins and associated vehicles during the time frame of Thursday, July 9, from 10 p.m. to Friday, July 10 at 12 p.m.,” he said. “We are requesting any information the public may have on Dinkins’ whereabouts in the Quad-Cities area during that time frame.”

Vehicles associated with Dinkins include a 2007 Maroon Chevy Impala, 2012 Black Chevy Camaro and a 1980s Kings Highway motorhome. All these vehicles are currently being impounded and in the possession of investigators, Sikorski said.

Crime Stoppers of the Quad Cities announced Saturday it is offering a $3,500 cash reward for any information that assists area law enforcement in locating the missing 10-year-old.