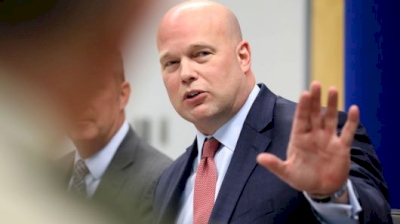 The following speech was given by Acting Attorney General Matthew G. Whitaker in Austin, Texas.

On behalf of President Donald Trump, I want to thank all of the law enforcement officers who are here today.

As he showed clearly on Friday at our Project Safe Neighborhoods Conference, the President supports law enforcement 100 percent.

Texans know as well as anyone that our Southern border is in a crisis—and that crisis has been building for some time. It’s abundantly clear to anyone who works in the immigration space that the crisis was exacerbated by decisions made during the last administration.

An estimated 11 million people are here illegally.  That’s the equivalent of the state of Georgia—here in direct violation to our laws.  Over the last two months, the United States Border Patrol has apprehended over 50,000 aliens who crossed the border illegally—including more than 23,000 people in family units. That’s the size of a small city every single month.

Now, some do get removed, but too many do not—and take advantage of loopholes that lead to their release into the United States.

This lawbreaking comes at a high cost.  This country spends billions of dollars every year on illegal aliens—on medical care, our prisons, and on public education.

This summer the Department put out a report that showed that—as of January 1, 2018—there were 39,000 illegal aliens either in federal prisons or in custody of the Marshals Service.  And there were another 15,000 that were under investigation to determine whether they were here legally.  The Marshals Service estimated that they were spending more than $1.4 million a day housing illegal aliens.

The tens of billions that we spend on illegal aliens could be spent on Americans—on education for our children, health care for our elderly or our sick, or on roads and bridges.

More important than the financial cost we pay is the cost we pay in American lives.  Massive illegal immigration makes all of us less safe.

We know that the vast majority of the cocaine, methamphetamine, heroin, and fentanyl that are killing record numbers of Americans was not made in this country.  It came over the Southern border.  We also know that vicious gangs like MS-13 recruit new members from the tens of thousands of unaccompanied minors who cross our border illegally every year.

The result is that Americans die every year because we do not have a secure Southern border.

This is completely unacceptable.

The first and most important obligation of government is to keep its citizens safe.  The failure to secure our border over the last 30 years therefore represents an enormous failure of government to fulfill its most sacred duty of all.

Here in Texas, there are an estimated 1.6 million illegal aliens—about six percent of the population.

Austin is considered to be in the top 20 cities in America in terms of illegal alien population.  Pew Research estimates that there are about 100,000 illegal aliens in the Austin-Round Rock area.

With a group that big, unfortunately, many of these people have committed crimes since they came here.

Just a few months ago, an illegal alien here in Austin was sentenced to 49 years in prison for aggravated sexual assault.  He is already a convicted murderer.  He had already been deported once.  But he re-entered this country.

This office has prosecuted a number of illegal aliens for committing violent crimes or drug crimes in Texas.  For example, you secured convictions for a gang that worked for the Los Zetas cartel.  The gang imported more than 65,000 pounds of cocaine into the United States and laundered more than $20 million.  Three of the defendants in that case were illegal aliens.

The Texas Department of Public Safety estimates that more than 273,000 illegal aliens have been booked into local Texas jails over the last seven years.  Just 184,000 of those criminals were charged with more than 280,000 crimes including 500 homicide charges, 32,000 assault charges, 36,000 drug charges, and 2,000 sex offense charges.

None of these crimes should have happened.  Each one was preventable—and they should have been prevented.

It is not fair to the people of Texas that they have to suffer these crimes.  Illegal aliens are coming here in violation of our laws, committing crimes, and Texans are paying the price.

The American people have been waiting for decades for their government to do something about it.

And with President Donald Trump—we finally have an opportunity to fix this problem for good.

Under his strong leadership, the Department of Justice has done its part to restore legality to our immigration system.

First, we have provided our U.S. Attorneys with more resources.  Over the past year, we’ve conducted the largest surge in federal prosecutors in decades, if not ever.  We’ve sent fourteen new AUSAs to this office, with ten of those attorneys just focusing on immigration crimes.

And we’re getting results.  In fiscal year 2018, we charged more illegal aliens with illegal entry than in any year in American history.  In fact, we charged 85 percent more defendants with illegally entering America than we did in the previous year.  At the same time, we increased the number of felony re-entry prosecutions by more than 38 percent.

Texas has shown real leadership on this issue.  Last year, Governor Abbott signed SB-4 into law, which banned sanctuary cities in Texas.  The Department of Justice filed an amicus brief in defense of this law.  And with regard to the vast majority of the law, we won.

Third, we have taken action to end President Obama’s unlawful DACA program, which effectively gave legal status to certain illegal aliens, even though Congress had never given him the authority to do so.  In fact, Congress had considered that idea and rejected it.

Fourth and perhaps most importantly, we have made some commonsense reforms to stop the rampant abuse of our asylum system.

In 2009, the Department of Homeland Security reviewed more than 5,000 initial asylum screenings.  Within seven years, that number had increased to 94,000.  The number of these aliens placed in immigration court proceedings went from fewer than 4,000 to more than 73,000 by 2016—nearly a 19-fold increase.

We should ask ourselves why that increase happened.

Asylum is only for those who fear persecution on the basis of their race, religion, nationality, political opinion, or membership in a particular social group.

But what happened is that word got out that you could game the system.  People found out that you could apply for asylum and then get a work authorization in the United States while you waited for a court date.  That might take years—and you could disappear before that ever happened anyway.

Word got out that you could cross the border illegally, live here as an illegal alien—and then, if you got caught, you could just claim asylum.

It is a fact that the vast majority of asylum claims at our Southern border are simply meritless.  Over the last five years, only 20 percent of aliens have been granted asylum after a hearing before an immigration judge.

In response, the Department of Justice under President Trump has restored precedent in asylum cases to bring it more in line with what Congress has actually told us to do.  We have overturned cases that did not meet the standards set out by law—and by doing that, we have taken away some of the incentives to make meritless claims.

Most recently, this administration made reasonable policy decisions regarding who is eligible for asylum.

If they’ve actually been persecuted on the basis of their race, religion, nationality, political opinion, or social group, then they can still receive asylum.  They just need to come here legally.

Unfortunately, however, many of the steps that we have taken to restore the rule of law in immigration have been blocked by federal district judges, some of whom claim that they can stop the government from carrying out a law or policy nationwide.

For most of American history, that has been obvious.  In the first 175 years of the Republic, no district judge claimed to block the federal government nationwide.  But in less than two years of this administration, President Trump has been hit with 28 of these orders.  That’s more than the first 41 presidents combined. The Department of Justice has consistently opposed these rulings for decades.

So we are going to keep fighting in these cases.  We will take this fight all the way to the Supreme Court.

We believe that the Supreme Court should issue a clear ruling that shows that district judges cannot issue nationwide injunctions.

When that happens, then we can finally finish the work that we have started.  We can continue to fix our broken immigration system, end the illegality, and protect the American people from criminals.

This is the greatest nation in the history of the world.  It is no wonder that people want to come here.  We just ask that they do so lawfully.

I want to conclude with something a mentor of mine used to say every time he spoke to law enforcement, and I believe it too: We have your back, and you have our thanks.