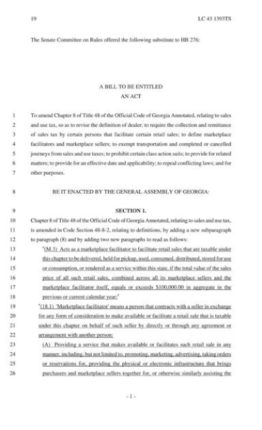 The eyes of Georgia turned briefly to the coast Monday morning as state Rep. Don Hogan, R-St. Simons Island, fulfilled his role in the ceremonial opening of the 2020 session in the state House of Representatives.

“And now, a moment I have been waiting for, for three or four months,” Speaker of the House David Ralston said. “Do y’all feel the tension building? The chair recognizes for the report of the Committee on Information and Audits, the chair of that committee, the gentleman from the 179th District, representing the coast of Georgia, Chairman Don Hogan.”

The recognition was the cause of some mirth within the chamber, as state Rep. Noel Williams Jr., R-Cordele, and state Rep. Matt Dollar, R-Marietta, chuckled throughout the process.

“Just look who you’ve surrounded me with,” Hogan said, referencing Williams and Dollar. “Mr. Speaker, your Committee on Information and Audits has read the journal of the previous legislative day, and found it to be correct. And what a great start of this session.”

The House had a light day, approving a resolution that lays out the schedule for the next 14 legislative days, and going through first and second reading of a number of bills.

Notable among the second readers is H.B. 720, sponsored by state Rep. Steven Sainz, R-Woodbine, among others, which mandates probation to follow prison time for convicted sex offenders. Judges would also have the ability to set a maximum life probation penalty if the defendant is convicted of a felony.

The bill also reorganizes how the state determines risk and how it classifies people considered sexually dangerous.

H.B. 724, lead-sponsored by state Rep. Matthew Wilson, D-Brookhaven, would decriminalize marijuana possession in unincorporated areas of counties, with the maximum penalty limited to a fine of $1,000. Counties would be able to set other, lesser penalties.

H.R. 811, sponsored by state Reps. David Knight, R-Griffin, and Trey Rhodes, R-Greensboro, urges the House to take a closer look at the Spaceport Camden proposal and consider the risks in approving the venture.

Meanwhile in the other chamber, call it the day the lights went out in the Georgia Senate.

A power outage in the area of the State Capitol threw a bit of a wrench into the proceedings in the state’s upper chamber, though the schedule ran close to planned in the House.

Among the first considerations is a bill on internet sales taxes in which the Senate insisted on its version of the bill, H.B. 276, and notified the House. The House voted against the Senate’s amendments to the bill at the end of the 2019 session, which sets things up for a conference committee to work out the differences.

Among the bill’s details, it would require sales taxes for use of ride share apps, and an online marketplace facilitator would be obligated to pay taxes for retail sales, not the marketplace seller. A marketplace facilitator, as defined in the bill, is someone who “contracts with a seller in exchange for any form of consideration to make available or facilitate a retail sale that is taxable under this chapter on behalf of such seller directly or through any agreement with another person….”

Retail sales will be assumed to be made in Georgia “if it is to be held for pickup, used, consumed, distributed, stored for use or consumption or rendered as a service within this state.”

Legislation taken up during first readers today in the House includes a coal ash cleanup bill, H.B. 756, which is one of the policy priorities of House Democrats.

The bill’s sponsors have a steep hill to climb, both in terms of lobbying and being in the minority party. Republican efforts on coal ash legislation in recent years — notably by state Rep. Jeff Jones, R-St. Simons Island, and state Sen. William Ligon, R-White Oak — never made it out of committee.