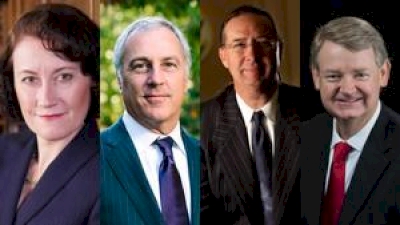 GLYNN COUNTY, Ga. (CBS46) — While much of the world knows the four faces at the center of the Ahmaud Arbery murder trial, it will be four others who will be responsible for convincing the jury of their case.

Here’s a look at the lead prosecutor, and the three defense attorneys trying this case.

Bob began his career as a Fulton County Public Defender before moving to the Georgia Attorney General’s Office where he represented the State Licensing Boards and prosecuted licensed professionals accused of unprofessional conduct. In 1991 Bob entered private practice emphasizing criminal defense while also working as a Special Assistant Attorney General prosecuting cases before the State Medical Board.

Bob has represented defendants in a wide variety of criminal cases, including high-profile clients in the “Dunwoody Daycare Murder” case, and the RICO prosecution of a principal in the Atlanta Public Schools (“APS”) cheating scandal. The APS case resulted in a 7-month trial–the longest criminal trial in Georgia history.

In addition to defending people accused of crimes and regulatory offenses, Bob is extensively involved in the Georgia Association of Criminal Defense Lawyers, having serving as President in 2016. Bob has also served as Chairman of the Lawyers Assistance Committee, helping lawyers charged with contempt.

Bob shares his experience with the legal community as a longtime adjunct professor of Advanced Criminal Trial Advocacy and Examination of Expert Witnesses at Emory University School of Law, a position he has held since 1993. He is also on faculty at the Bill Daniel Trial Advocacy Program and a frequent lecturer at seminars both nationally and throughout the State of Georgia. Currently, Bob is leading a team of seven other lawyers working with the U.S. State Department in the Republic of Georgia to help teach trial lawyers in the Republic of Georgia how to try cases before a jury.

A lifetime of superb advocacy resulted in Bob’s induction into the prestigious American College of Trial Lawyers and American Board of Criminal Lawyers in 2015. Bob has repeatedly been named a Super Lawyer in Georgia since 2010 and was named a Top Lawyer in White Collar Crime in 2013. Additionally, Bob has been named one of Georgia’s Legal Elite by Georgia Trend Magazine and one of the Ten Leaders in Criminal Law by the Ten Leaders Cooperative.

Franklin J. Hogue began his law career in 1991 with the Macon law firm then known as Brown, Katz, Flatau & Hasty. While he represented a variety of clients in his five years with that firm, his primary focus was and has always been in criminal defense. In early 1996 he formed his own law firm and practiced solo for about two years. In late 1997, his wife, Laura, became his law partner, forming Hogue & Hogue. Together they built a successful criminal defense practice, adding Keith Fitzgerald to the firm in 2010 and Travis Griffin in 2012. In 2017, they formed the law firm of Hogue Hogue Fitzgerald & Griffin. They practice exclusively criminal defense, having represented hundreds of people in state and federal courts, both at the trial and appellate levels, throughout Georgia.

Frank’s cases are as diverse as murder, money laundering, drugs and drug conspiracy, sex offense cases, all manner of fraud cases including tax, wire, bank, and mail fraud, and many more-virtually any kind of criminal case. His clients have received acquittals or dismissals in every type of case he tries, including an acquittal in a triple-murder case. He has represented individuals in eight death penalty cases-none of his clients in those cases is on death row.

Frank has been named by his peers to Georgia’s “Super Lawyers” each of the past several years, as well as to Georgia’s “Legal Elite,” an honor reserved for lawyers in the top five percent of their practice area. His peers have also given him the highest rating possible for legal ability and ethical standards in Martindale-Hubble. In 1999, Frank joined the faculty of the William “Bill” Daniel Trial Advocacy Program, an intense training for new criminal defense lawyers in Georgia, sponsored by the Georgia Association of Criminal Defense Lawyers. The next year, he joined the faculty of the National Criminal Defense College, the highly respected annual summer college for criminal defense lawyers from all over the United States. The year after that, in 2001, he joined the faculty of Walter F. George School of Law, Mercer University, as an adjunct, where he taught Advanced Criminal Trial Techniques to final-semester law students interested in pursuing a career in criminal law for 12 years. He is also on the faculty of the Baldus-Darrow Death Penalty Defense College, where he has taught for several years.

In 2013, Frank was inducted as a Fellow in the American College of Trial Lawyers, an organization that limits its membership to the top one percent of trial lawyers in any given state, membership that is extended only to those who are rated by their peers as exceptional in courtroom skill, ethics, and collegiality.

In 2016, Frank was invited, along with seven other colleagues, to create and teach a program of criminal defense trial skills to lawyers in the Republic of Georgia, a former Soviet Republic, which, when the Soviet Union collapsed in 1989-1991, returned to its former constitution, adding jury trials to the rights of its citizens. He has traveled to Georgia to teach six times over the last three years, with several more teaching trips in the planning stage.