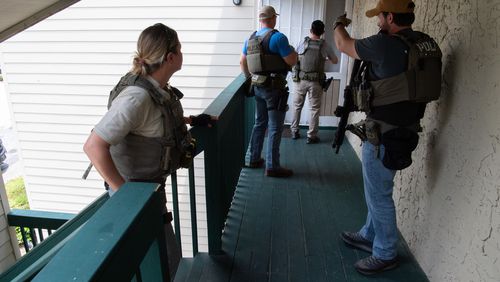 Public announcements about the operation, vague on details but full of loaded terms, led to weeks of social media misinformation about the breakup of a massive child sex trafficking ring in Georgia. “39 kids were just recovered from traffickers in Georgia,” went a common Twitter trope.

Shareef faces two misdemeanor charges related to the raid, neither of them sex-related. But his jail booking photo spread around the world under headlines such as “U.S. Marshals Find 39 Missing Children During Massive Sex Trafficking Bust In Georgia — 9 Suspects Arrested.” He and his mother told the AJC that angry people have been pulling up to their house, accusing him of sex trafficking or sexually abusing a 3-year-old. One group brandished guns and challenged Shareef to step outside and fight, he said.